The Gospel according to Beowulf 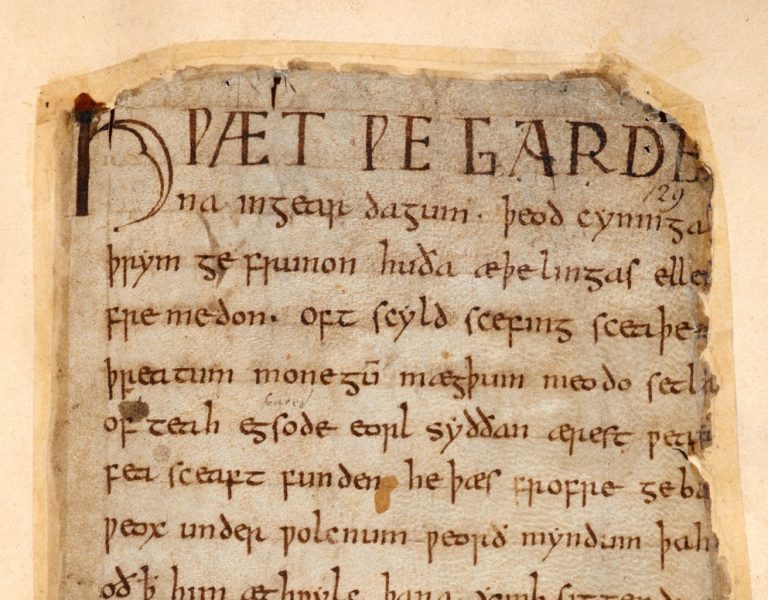 Throughout the poem there is language connecting the heroic exploits of Beowulf to the salvation that Christ has accomplished for us.

The great Anglo-Saxon poem Beowulf was written by a Christian to an audience that still knew well its people’s past under their false Norse gods. Throughout the poem there is language connecting the heroic exploits of Beowulf to the salvation that Christ has accomplished for us. Perhaps this was the poet’s way of teaching the people, “See, even though we worshiped false gods, there are still some good things from our past. The reason we all admire Beowulf is because our hearts longed for a man like him to come along and do what he did on a greater scale: defeat not only the monsters of earth, but our adversary the devil, and grant us peace and rest.”

A Danish king named Hrothgar had built a great hall in Denmark and called it Heorot. He wanted it to be a wonder of the world, a place of light and singing and feasting and giving gifts and enjoying company on the mead benches. In many ways it resembled the Church. But an evil monster named Grendel began coming to Heorot at night and slaying those who were there. People began shying away from the great hall until it was all but abandoned.

Beowulf, Hygelac’s kinsman, came from Geatland to the Danes because he heard about Grendel and wanted to do something about him. Beowulf’s coming from a foreign land to rescue a people who had done nothing to earn his intervention is reminiscent of the Incarnation of our Lord. Hrothgar gave Beowulf a warm welcome, was glad to have a champion at hand, and entrusted Heorot to Beowulf’s keeping. Beowulf forswore sword and shield in his battle with Grendel: he would defeat the monster with his bare hands, or he would die trying.

Beowulf and his men bedded down for the night, and Grendel was not long in coming. The monster prowled into the hall, and Beowulf struck. He latched onto Grendel’s shoulder with his hands. Grendel realized that this was a different fight, and a different sort of fighter. The poet describes the fight marvelously:

Then he who had harrowed the hearts of men
with pain and affliction in former times
and had given offence also to God
found that his bodily powers failed him.
Hygelac’s kinsman kept him helplessly
locked in a handgrip. As long as either lived,
he was hateful to the other. The monster’s whole
body was in pain, a tremendous wound
appeared on his shoulder. Sinews split
and the bone-lappings burst. Beowulf was granted
the glory of winning; Grendel was driven
under the fen-banks, fatally hurt,
to his desolate lair. His days were numbered,
the end of his life was coming over him,
he knew it for certain; and one bloody clash
had fulfilled the dearest wishes of the Danes.
(lines 808-823)

And so it has gone for the devil. The devil is not gone; he is not dead; he still prowls around like a roaring lion, seeking someone to devour (1 Pet. 5:8). But Christ dealt the devil a mortal wound by dying on the cross, and he will not have to deal the devil a second blow: the crucifixion will be the end of him.

Beowulf had Grendel’s disembodied arm as a trophy, and in the morning he showed it to Hrothgar and all the people. The Danes returned to the purged hall and made repairs and resumed their songs and feasts and joy. Beowulf told of his defeat of Grendel. Hrothgar gave a speech recounting their past miseries and how Beowulf has altered their case:

But now a man,
with the Lord’s assistance, has accomplished something
none of us could manage before now
for all our efforts. Whoever she was
who brought forth this flower of manhood,
if she is still alive, that woman can say
that in her labour the Lord of Ages
bestowed a grace on her.
(lines 938-945)

Jesus is that flower of manhood. Mary is his mother who gave birth to grace in her labor. And the God-man Jesus is the one who did what we could never do for ourselves. Martin Luther in his Large Catechism describes salvation in terms similar to those in which the poet has framed Beowulf:

“For when we had been created by God the Father, and had received from Him all manner of good, the devil came and led us into disobedience, sin, death, and all evil, so that we fell under His wrath and displeasure and were doomed to eternal damnation, as we had merited and deserved. There was no counsel, help, or comfort until this only and eternal Son of God in His unfathomable goodness had compassion upon our misery and wretchedness, and came from heaven to help us. Those tyrants and jailers, then, are all expelled now, and in their place has come Jesus Christ, Lord of life, righteousness, every blessing, and salvation, and has delivered us poor lost men from the jaws of hell, has won us, made us free, and brought us again into the favor and grace of the Father, and has taken us as His own property under His shelter and protection, that He may govern us by His righteousness, wisdom, power, life, and blessedness” (LC, II.28-30).

There’s more to the story of Beowulf, and I’ll leave that to your reading. As you go through this great poem, be on the lookout for similarities to the Gospel of Jesus Christ, for Beowulf is meant to reflect our Savior.

The translation of Beowulf is that of Seamus Heaney

Pastor Richard is the Assistant Pastor and Headmaster of Mount Hope Lutheran Church and School. He teaches Religion, History, English, Literature, Poetry, Logic, and Rhetoric to the upper level students. He enjoys studying the biblical and classical languages, writing poetry, and reading great works of literature. Pastor Richard is married and has five children.
All Posts »
PrevPreviousThere Is No Frigate Like a Book
NextIf—Next