The Poem “Conscience” by George Herbert

And the receipt shall be / My Saviour’s blood: whenever at his board / I do but taste it, straight it cleanseth me, / And leaves thee not a word; / No, not a tooth or nail to scratch, / And at my actions carp, or catch.

George Herbert (1593-1633) was a deacon in the Church of England and a gifted Christian poet. While he was born to a wealthy family and once held the prestigious position of Orator at the University of Cambridge, Herbert spent most of his brief adult life serving parishes in southern England. As for his poetry, Herbert published some Latin works during his lifetime, but he left his English works, compiled in a collection called The Temple, to the care of his friend Nicholas Ferrar. On his deathbed, Herbert told Ferrar to publish the poems only if they would “turn to the advantage of any poor dejected soul.” To Ferrar, it was clear—as it still is to all who read Herbert’s beautifully devotional work—that the collection would do exactly that.

One of Herbert’s comforting poems to the “poor dejected soul” is titled “Conscience.” The third-fifth grade class at Mount Hope recently committed this to memory. The poem’s speaker is a Christian who must confront the guilty conscience that plagues him. Here is the text:

Prattler, no more, I say:
My thoughts must work, but like a noiseless sphere;
Harmonious peace must rock them all the day:
No room for prattlers there.
If thou persistest, I will tell thee,
That I have physic to expel thee.

And the receipt shall be
My Saviour’s blood: whenever at his board
I do but taste it, straight it cleanseth me,
And leaves thee not a word;
No, not a tooth or nail to scratch,
And at my actions carp, or catch.

Yet if thou talkest still,
Besides my physic, know there’s some for thee:
Some wood and nails to make a staff or bill
For those that trouble me:
The bloody cross of my dear Lord
Is both my physic and my sword.

Herbert begins this poem by describing the effects of a guilty conscience on the Christian. Such a “peace-prattler” infects all his senses: a “fair look” is “foul,” a “sweet dish” is “sour,” and music is a howling noise. As long as guilt afflicts him, the speaker cannot enjoy any pleasures of life. Yet, he fearlessly rebukes his conscience, for he insists that his thoughts must be moved by “harmonious peace” alone, with “no room for prattlers.” And his warning is not empty. This Christian has a “physic,” or medicine, that will cast out the bad conscience: “My Saviour’s blood,” taken at His table. A mere taste, the speaker says, cleanses him and silences the prattler. Drinking this blood ends the inward grappling with guilt and, in a most outward and certain manner, makes him blameless. A physic, indeed, that no prattler can stand!

Yet the speaker concludes with a final threat: “If thou talkest still,/ Besides my physic, know there’s some for thee!” While the Christian’s medicine cleanses him, the prattler’s is a weapon that bludgeons it into silence. “The bloody cross of my dear Lord”— pictured as a staff, bill, and sword— disarms every accusation. Jesus took away all sin and guilt. The speaker’s conscience can no longer trouble him.

George Herbert wrote an abundance of other poems on Christian faith and piety (for example, here is a beautiful poem for Easter!). His work stands as an excellent example of language toward its proper end—the faithful confession of Christ and the Gospel. 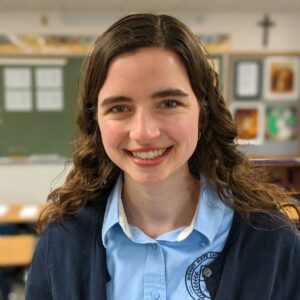