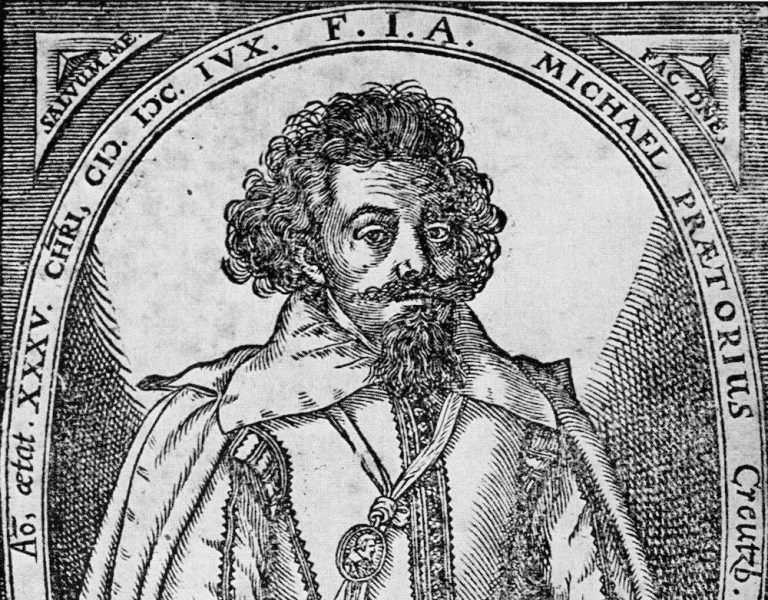 There are those who believe it proper and right that, next to theology, the highest place should be accorded to music, since it is a beautiful and splendid gift of God...

Michael Praetorius (1571-1621) was the son of a Lutheran pastor and arguably the best composer of Church music after Bach. Here’s a case in point, the closing hymn of his Christmas Mass, In Dulci Jubilo (known to us as “Now Sing We, Now Rejoice”); if you have good speakers, crank it up. We actually have his setting of “Lo, How a Rose E’er Blooming” in our hymnal (LSB 359). His masterwork on Church music and instrumentation, Syntagma Musicum, is still consulted today by organ builders. One of his compilations, Musiae Sioniae, contains 1,244 settings of chorales and attests to his compositional skill and influence on Church music. Here’s an excerpt from his Syntagma Musicum, Volume Two, Part 3, Chapter 1, in which he speaks of the importance of good music in the Church:

“There are those who believe it proper and right that, next to theology, the highest place should be accorded to music, since it is a beautiful and splendid gift of God, and provides an image of music in heaven, where God’s holy angels together with the entire heavenly host praise their creator without ceasing in gentle harmony, and sing ‘Holy, holy, holy is God, the Lord of Hosts.’ Among its many merits, effects, and powers, perhaps not the least is that music is in its essence more a spiritual than an physical phenomenon, and thus awakens in human hearts an inner spiritual devotion, in order to praise Almighty God all the more fervently with beautiful psalms and hymns of praise. Thus both King David and King Solomon, when they wished to arrange worship in the Jerusalem Temple as magnificently and elegantly as possible, went to great effort and expense to appoint many musicians, both singers and instrumentalists, with the intent of making the people more fervent and zealous. David himself used his harp for the same purpose, and doubtless had several splendid organs built and placed in the Temple, because of its great size.

“Thus church music, as a service to God, ought properly to be held in great esteem today as well, and to be celebrated with all due reverence. For this purpose skillful, celebrated organists are needed, who inspire rather than irritate their listeners, and who make God present to hearts and minds, as they prelude upon a text or psalm with appropriate devotion. But when this purpose is not heeded, and due to indifference someone is appointed who can only play little dances, then church music will soon come to be held in contempt, and even be abolished due to abuse; experience has proven this to be true.

“And religion itself is usually the next to go; this has indeed happened in Greece, where in the past music flourished at the highest level. Since Mohammed has pitched his tent [i.e., since Islam took root in that area], however, music has decayed so badly that it has all but disappeared. Indeed it is held in such low esteem that, just as among the barbarians, the panpipe and drum are favored above decent and proper music. A number of years ago the King of France, Francis I, sent the Turkish Emperor Suleiman the finest musicians, intending thereby to do him great honor. But the latter soon did away with them and sent them back, with the message that such music was inappropriate for his people, since it only made their spirits soft and effeminate. This is entirely contrary to the opinion of the [ancient] Greeks (who scorned anyone inexperienced in music, and never bestowed high office upon him, since they were of the opinion that experience with music developed good character).

“And experience proves that music cannot survive where the devil holds sway, since the godless are not worthy of it.

“But the true church has always held music in high regard: there has never been a chapel to equal that of King Solomon, as described in the fourth chapter of the second book of Chronicles.”

May the Lord continue to raise up godly and skilled musicians for service in his Church!

Quote from “Syntagma Musicum II, Parts III-V,” translated and edited by Quentin Faulkner, available for free at this link

Pastor Richard is the Assistant Pastor and Headmaster of Mount Hope Lutheran Church and School. He teaches Religion, History, English, Literature, Poetry, Logic, and Rhetoric to the upper level students. He enjoys studying the biblical and classical languages, writing poetry, and reading great works of literature. Pastor Richard is married and has five children.
All Posts »
PrevPreviousAmbrose of Milan
NextHow Seriously the Spartans Took MusicNext