The Goal of Education Part I: Educating for Mammon? 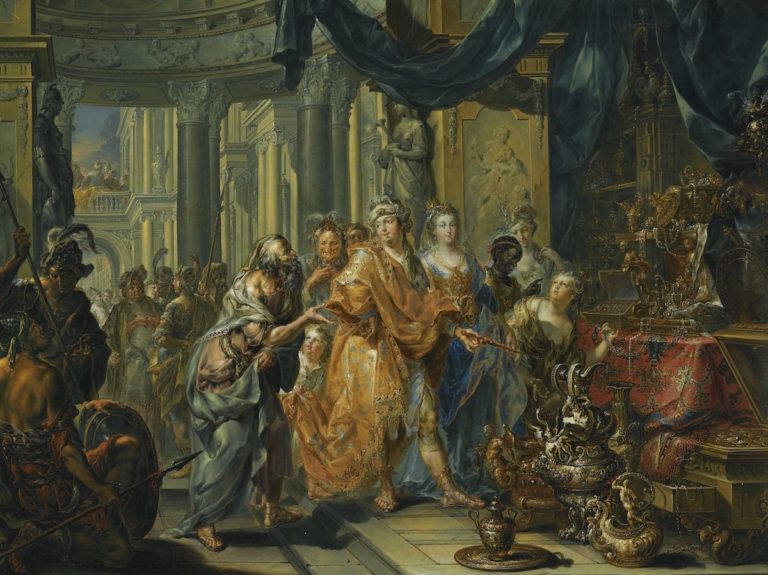 A common goal of education is to turn children into money-makers. This goal has two flaws. First, it treats the child as if he has no soul, as if this body and life are all there is. And second, it pretends that it’s acceptable, and even good, to live for oneself, to amass a pile of Mammon and be satisfied.

What is the goal of education? Or another way of putting it, What is the touchstone by which we know that the education of a child was successful? The common standard for judging an education is the ability to make money: Can the educated child get a job and make a living? Now perhaps this is a selfless goal on the part of parents; they want a good life for their child. This goal can have selfish motives, “I want him self-sustaining so that he’ll move out,” or really selfish, “I want him to be able to take care of me.” And yet even when the goal of educating for the sake of money is selfless on the parents’ part, this goal has two flaws. First, it treats the child as if he has no soul, as if this body and life are all there is. And second, it pretends that it’s acceptable, and even good, to live for oneself, to amass a pile of Mammon and be satisfied.

In order to understand the flaws with Educating for Mammon we must have a proper opinion of Mammon, and also rightly understand the chief characteristics of the Christian life.

So first, what is Mammon, and how should we regard it? Mammon is the sum total of money and possessions that exceeds what we need for our daily bread. Rather than trusting that God will provide for all our needs of body and soul as he has promised, much more often we trust Mammon for security. Martin Luther comments on this in his Large Catechism when discussing the First Commandment, “You shall have no other gods”:

There are some who think that they have God and everything they need when they have money and property; they trust in them and boast in them so stubbornly and securely that they care for no one else. They, too, have a god – mammon by name, that is, money and property – on which they set their whole heart. This is the most common idol on earth. Those who have money and property feel secure, happy, and fearless, as if they were sitting in the midst of paradise. On the other hand, those who have nothing doubt and despair as if they knew of no god at all. We will find very few who are cheerful, who do not fret and complain, if they do not have mammon. This desire for wealth clings and sticks to our nature all the way to the grave.
(Large Catechism, I.5-9)

And Luther is merely expounding what Jesus himself had to say on the topic: “Take heed, and beware of covetousness: for a man’s life consisteth not in the abundance of the things which he possesseth” (Lk. 12:15), and, “No man can serve two masters: for either he will hate the one, and love the other; or else he will hold to the one, and despise the other. Ye cannot serve God and mammon” (Mt. 6:24).

The Apostle Paul also comments on Mammon when writing to Timothy: “But godliness with contentment is great gain. For we brought nothing into the world, and it is certain we can carry nothing out. And having food and raiment let us be therewith content. But they that will be rich fall into temptation and a snare, and into many foolish and hurtful lusts, which drown men in destruction and perdition. For the love of money is the root of all evil: which while some coveted after, they have erred from the faith, and pierced themselves through with many sorrows” (1 Tim. 6:6-10).

From this common testimony we have a very clear Christian perspective: while we acknowledge our need for daily bread, we hold Mammon in great suspicion as a potential idol. Owning Mammon is not in itself a sin, so long as we own it and it doesn’t own us. And that latter possibility is a very real danger. Mammon may take the form of inanimate objects, but Jesus speaks of it as a prospective master with a will of its own that speaks imperiously and makes demands and forcibly compels.

John Milton captures this living and willful nature of Mammon very well in his epic poem Paradise Lost. Toward the end of Book I, the demons, having somewhat recovered from the initial shock of being thrown into hell, and spurred on by a rousing speech from Satan, prepare to build their evil city Pandemonium:

…Mammon led them on,
Mammon, the least erected spirit that fell
From heaven: for even in heaven his looks and thoughts
Were always downward bent; admiring more
The riches of heaven’s pavement, trodden gold,
Than aught divine or holy else, enjoy’d
In vision beatific: by him first
Men also, and by his suggestion taught,
Ransack’d the centre, and with impious hands
Rifled the bowels of their mother earth
For treasures better hid. Soon had his crew
Open’d into the hill a spacious wound,
and digg’d out ribs of gold. (Let none admire
That riches grow in hell; that soil may best
Deserve the precious bane.)…
(Book I.678-692)

After the demons have completed the city, they all assemble in the spacious hall in secret conclave. Satan sits on a throne, gives a brief speech, then opens the floor to debate concerning their best course of action. Moloch speaks first, then Belial. Third, Mammon gives his advice: War will result in defeat. Even if God is gracious and receives the demons back to their former posts (on pledge of their obedience), Mammon cannot abide the thought of singing “warbled hymns” and “forc’d hallelujahs.” Let us not war, nor return to subjection, “but rather seek Our own good from ourselves, and from our own Love to ourselves; though in this vast recess, Free, and to none accountable; preferring Hard liberty before the easy yoke Of servile pomp…” (II.252-257).

Mammon deludes himself into thinking that God’s creatures can be independent of God, autonomous, self-sufficient. He teaches all who will listen to him to think this way: to look to their own hands instead of God’s, to live from themselves and to themselves, to prefer a selfish life in hell over a creaturely life in heaven. He points to the burning ground, just as he now points to earth, and says, “This desert soil Wants not her hidden lustre, gems, and gold; Nor want we skill or art, from whence to raise Magnificence; and what can heaven show more?” (II.270-273). The demons didn’t take Mammon’s advice, but human ears are easily persuaded to his blasphemous words.

Is Educating for Mammon starting to sound foolish, and even dangerous? I really hope it is. And what’s the alternative? Continue reading: The Goal of Education Part II.

Quotes of Large Catechism are from The Book of Concord: The Confessions of the Evangelical Lutheran Church, ed. Kolb & Wengert

Scripture quotations are from the King James Version.

Pastor Richard is the Assistant Pastor and Headmaster of Mount Hope Lutheran Church and School. He teaches Religion, History, English, Literature, Poetry, Logic, and Rhetoric to the upper level students. He enjoys studying the biblical and classical languages, writing poetry and hymns, singing, and reading great works of literature. Pastor Richard is married and has five children.
All Posts »